Most folks don’t know that Abby was a huge part of my business and was with me right from the very beginning. My tag line, “where learning is fun” was created specifically for her and because of her. We did a 3 month 100% correction based trainers program and she was a real trooper. Thanks to what we went through, I have worked really hard to create a special environment for you and your dog.

“I am grateful for what Abby taught you, her legacy will continue to live through the work you do.”

“What you’ve created for all of us, to learn to have fun with our dogs, will be a legacy in her memory.”

“Abby did an awesome job of creating a special environment for your students.”

“You and your dog have definitely created a wonderful place to play and learn.” 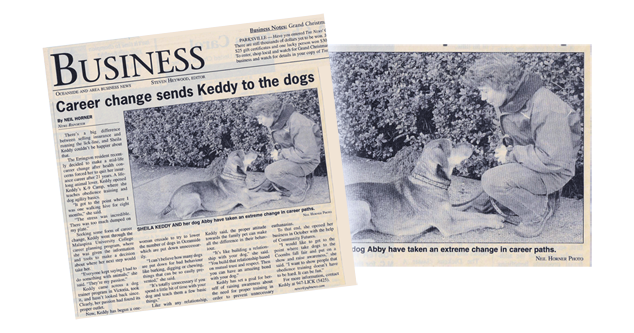 There’s a big difference between selling insurance and running the lick-line and Sheila Keddy couldn’t be happier about that.

“It got to the point where I was one walking hive for eight months”, she said.

Seeking some form of career change, Keddy went through the Malaspina University College career planning program, where she was given the information and tools to make a decision about where her next step would take her.

“Everyone kept saying I had to do something with animals”, she said “they’re my passion”.

Keddy came across a dog trainer program in Victoria, took it and hasn’t looked back since. Clearly her passion had found its proper outlet.

Now, Keddy has begun a one woman crusade to try to lower the number of dogs in Oceanside which are put down unnecessarily.

“I can’t believe how many dogs are put down for bad behaviour like barking, digging or chewing, things that can be so easily prevented”, she said.

“It’s totally unnecessary if you spend a little bit of time with your dog and teach them a few basic things”.

Like with any relationship, Keddy said, the proper attitude towards the family pet can make all the difference in their behaviour.

Keddy has set a goal for herself of raising awareness about the need for proper training in order to prevent unnecessary euthanasias.

To that end, she opened her business in October with the help of Community Futures.

“I would like to get to the Coombs fall fair and put on a show and raise awareness”, she said. “I want to show people that obedience training doesn’t have to be hard. It can be fun.”

August 10, 2019, will be the SECOND time we have done an agility demonstration at the Coombs Fall Fair !!

Abby on the Teeter 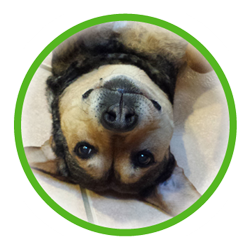 Yes, that is her in the logo. She was my constant companion and training partner for 3 months when we did our trainer’s program.

She had way too much energy. We picked her because she was jumping the highest in the cage at the Parksville SPCA. We brought her home in June 2006 and she was nothing short of a demon!! She was going to be a companion for our Honey Bear. There was many times Honey would look at me – “what did I do to deserve this?”

Abby really liked white things – tearing them apart was fun! She didn’t care that it was the new white dress shirt on the clothes line or the down comforter that was being aired out. I had not yet realized the benefits of proper exercise.

Our first camping trip did not get off to a good start when she woke everyone at 5:00 am with her barking. When the humans shouted at her to shut up, she loved it. Barking is a group activity and everyone just joined in ! YAY !!

However, after we graduated, no one could believe this was the same dog. She could hold a sit, lie down and come blasting across the ball field with a mere hand signal and stop inches in front of me in a perfect sit!

Abby taught me about dog body language, timing and manners. It is rude for your dog to stare at another dog because it can be read as a challenge or a threat. Abby was always watching so if and/or when another dog held her gaze, she would happily and quickly pounce on them!! Dogs give plenty of signals – if you know what to look for. Her tail would go straight up and stop moving; her brows would crease; she would “lock” her eyes on the target and her whole body could go stiff, including her head.

Pulling back on the leash was a huge mistake – that just sent her right at the other dog. A touch near her back end or a quick tail tug could get her attention so we could move away. Even better – PREVENTION – watch your dog, learn their signals so the second you see that little freeze or stillness you can be proactive.

Introducing new dogs that are pulling on their leash to get nose to nose is a great way to start a fight. Walking them forward is a natural way of going. This is why pack hikes are so effective. Humans greet face to face, dogs – well, let’s “face it” – they greet nose to butt. That is polite in their world.

Abby also taught us about the sweet and subtle ways they can take over without you realizing it. How affectionate of your dog to walk up to you and put their paw on your foot – awe, isn’t that cute ? Nope! Gotcha !

Or how about when they lean against your leg or sit on your foot and you lovingly reach down and touch them? Sigh….YOU are being very well trained LOL

When they jump on you and you step back ? Dogs are all about space and you just gave it to them. Instead, shift your weight forward or take a step forward (or backwards or sideways) do NOT knee your dog – simply claim the space in a calm quiet way. Works wonders. 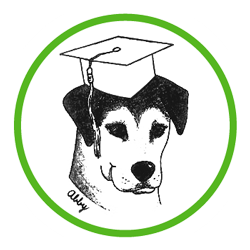